School Performance Tables this link takes you to the performance results from schools across England.

You can search for schools and see us, or go directly to our page here: Meadowhead School Academy Trust performance information 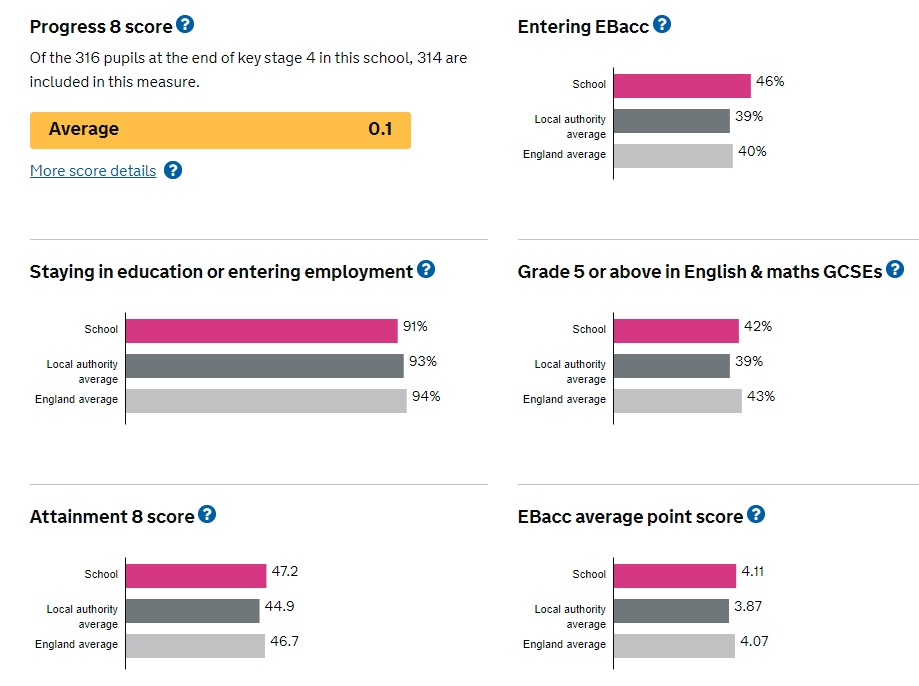 These figures tell you about performance of students at this school or college at the end of their 16 to 18 phase of education. These figures were published in April 2020 and relate to students who completed their 16 to 18 studies in the summer of 2019, except where stated otherwise.

The number of students shown for each type of qualification is the number who completed their 16 to 18 study at this school or college in 2019. Some students are included in more than one group - for example, a student who studied an A level will be counted in 'A levels' but also in 'Academic qualifications'.

These figures are based on students who entered at least one A level or AS level. A levels are available in a wide range of subjects, including English, maths, sciences, languages and humanities. The primary purpose of A levels is to prepare students for degree-level study at university. 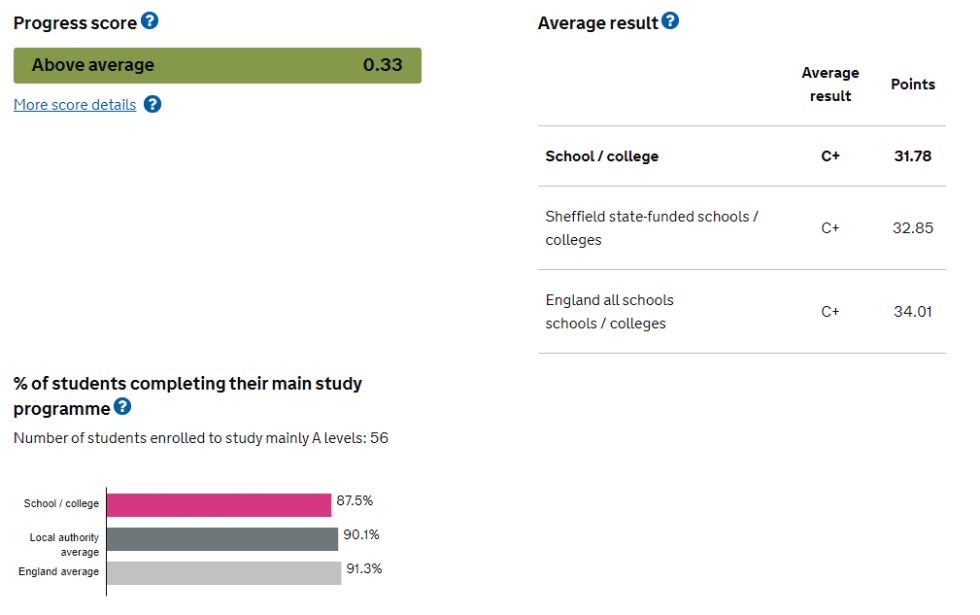 Academic qualifications (including A levels) - 75 students 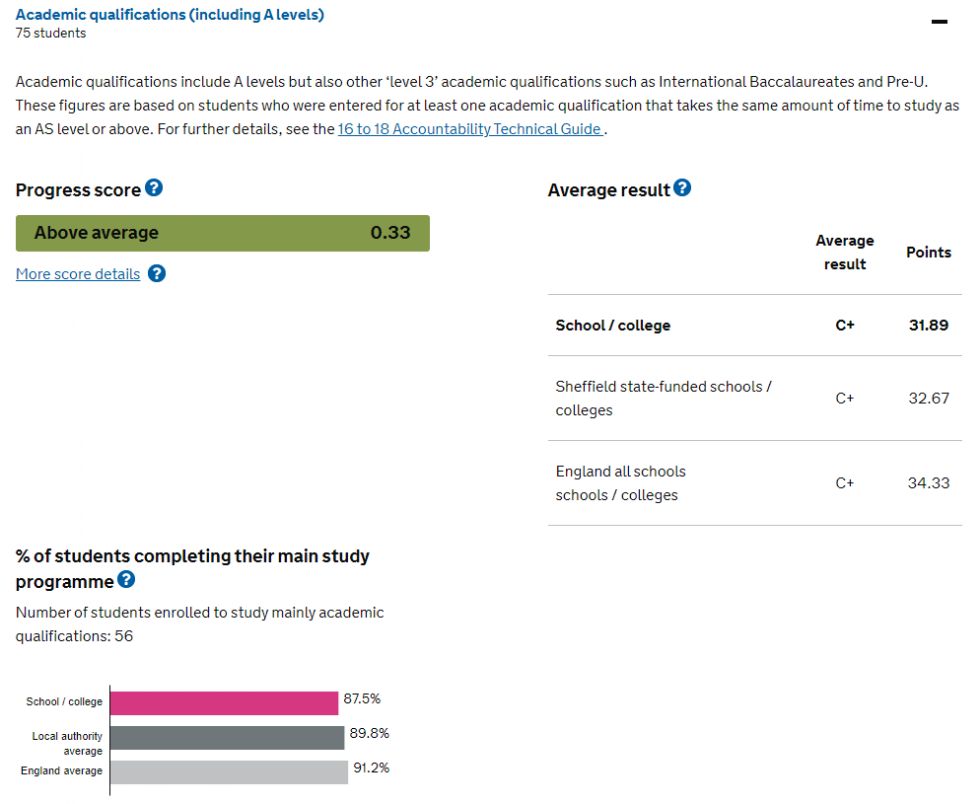 Applied general are qualifications that provide broad study of a vocational area. They are designed to lead to higher education and they include areas such as performing arts, business and health and social care. These figures are based on students who were entered for at least one applied general qualification. 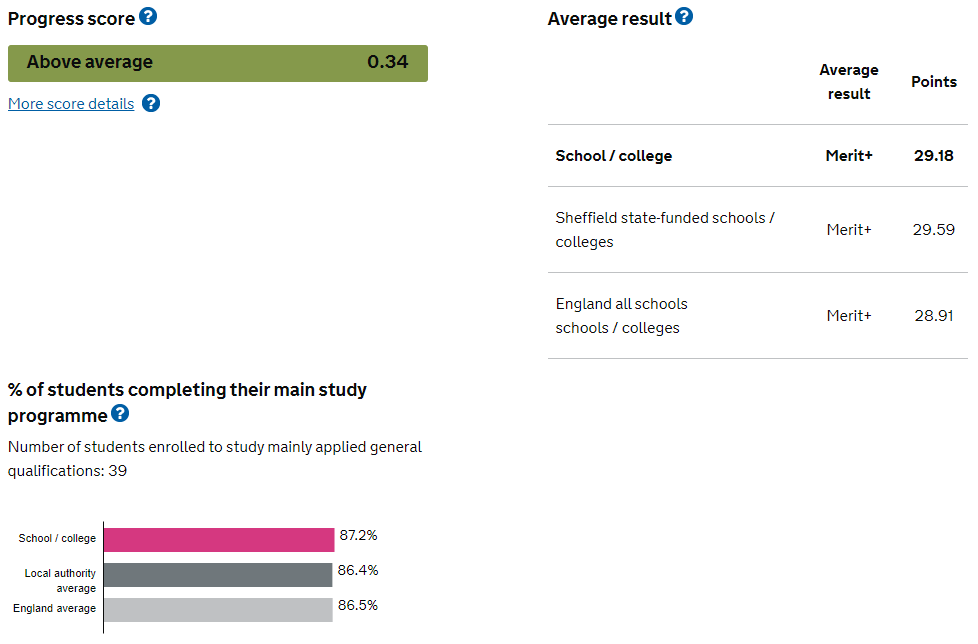 These scores show how much progress students at this school or college made in English and maths qualifications such as GCSE re-takes, between the end of key stage 4 and the end of the 16 to 18 phase of education. A positive score means that, on average, students got higher grades at 16 to 18 than at key stage 4. A negative score means that, on average, students got lower grades than at key stage 4. Students are included in these measures if they did not achieve a grade 4 or higher in their GCSE or equivalent by the end of key stage 4 in that subject.

You can compare the students' results with performance at state-funded schools and colleges at local authority and national level.

Students that left 16 to 18 study at this school or college in 2017, who either stayed in education or went into employment from October to March the following year, or stayed in an apprenticeship for at least 6 months. The data published in January 2020 is for all students that left 16-18 study at this school or college in 2017, regardless of the qualification that they took. This is different from the data that we published in January 2019 which was for students who took level 3 qualifications (A levels or other level 3 qualifications) only. Information about the destinations of level 3 students only can be found in the breakdown of destinations here