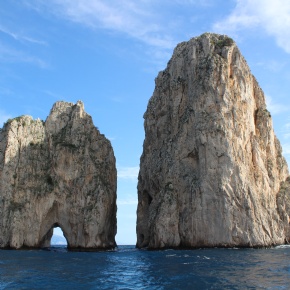 Meadowhead’s recent visit to Italy was a huge success with 36 Year 11 students visiting the bay of Naples. All thoroughly enjoyed it as they explored this iconic region....

Meadowhead’s recent visit to Italy was a huge success with 36 Year 11 students visiting the bay of Naples. All thoroughly enjoyed it as they explored this iconic region. 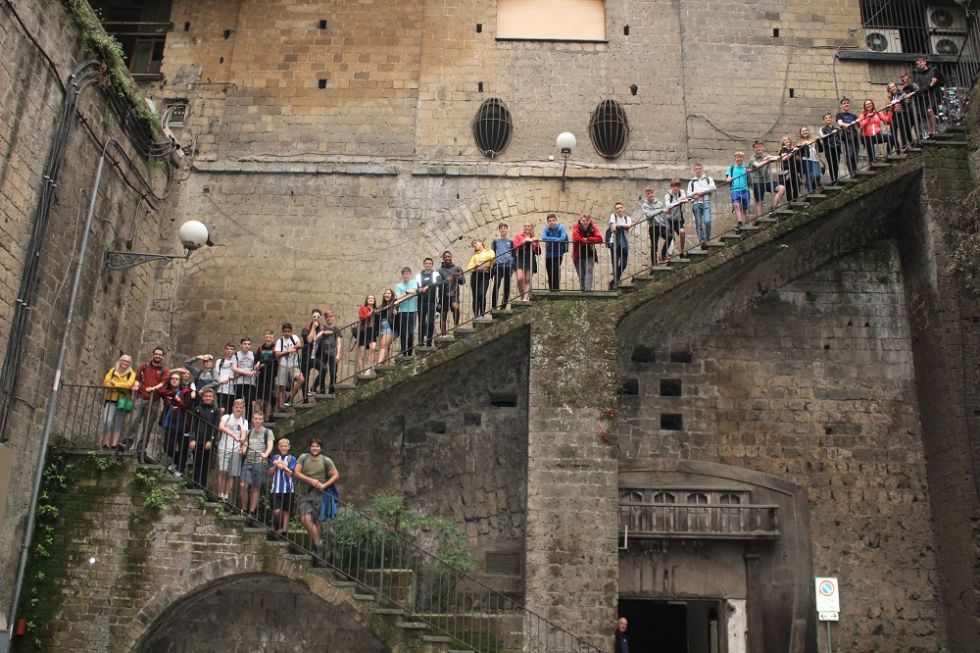 The first full day in Italy and we think we have definitively discovered whom amongst us has our sea legs and who doesn't! The ferry over to Capri claimed 2 victims on the slightly choppy crossing, however little did we know the worst was yet to come on the boat ride round the island!

Despite the choppy seas claiming a few more victims, the students who were not studying the floor of the boat, saw some beautiful coastal features including Caves, Arches, Stacks and Stumps around the coast of Capri.

Back on dry land in port and after some much needed restorative pizza, we rode the binocular up to the town. A wander through the bustling streets led to some spectacular views of the coastal landforms we had seen on the boat trip (or that at least some of us had seen)! Further exploration of the town, along with gelato consumption followed, before it was time to return the mainland.

The return trip was 100% successful with no one feeling under the weather. It is fair to assume that exposure is the best cure for sea sickness. 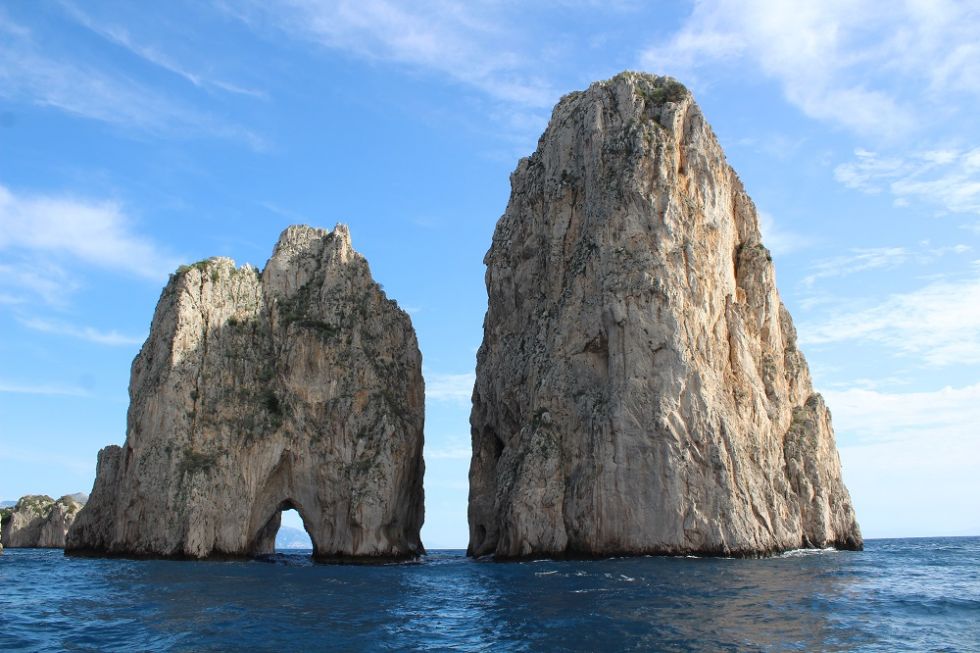 Day 2- A volcano, a city and a drenching!

We thoroughly enjoyed our journey both up and down the windy mountain pass to Vesuvius! Unfortunately, Vesuvius was conveniently 'unsafe' on a bank holiday. Plan B kicked into action and we headed on to Pompeii. With traditional Italian flair, our guide led us through the streets of the city, which was destroyed when Vesuvius erupted.

We then tested our waterproofs in Marina Grande, the local fishing harbour, before strolling/swimming to the cloisters and the Park Villa Comunale. After taking in the sights of the cloisters twice, we explored the bustling narrow streets of Sorrento, where we purchased an array of citric products

After tea, students took part in the inaugural bay of Naples pub quiz. Following rounds testing their music, geographical and historical knowledge of all things Italy, we finished off with a general knowledge round. It was a close fought battle, but eventually, the 'cobbled streets' team emerged victorious. They celebrated their victory with a personalised Sorrento pencil and some sweets that looked suspiciously like lemon sherbets. The teams in second and third place won lemon soap. Unfortunately an un-named member of one of these teams only realised this after discovering their soap looks and smells better than it tastes. 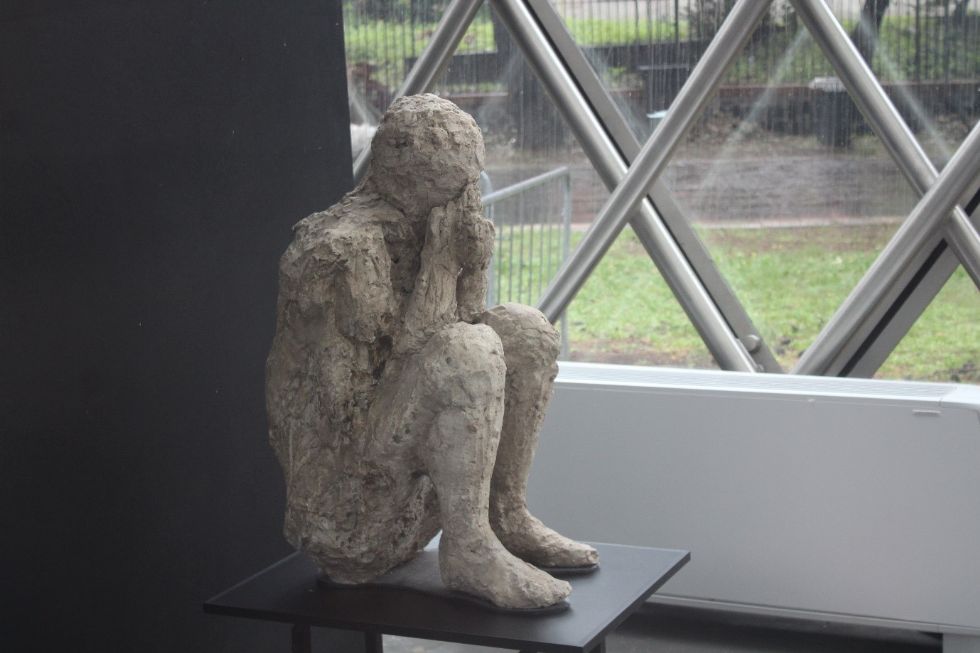 Another wet, windy but beautiful day travelling along the Amalfi Coast. Pretty soon after the start of the journey the spectacular views allegedly appeared. We would like to be more certain but they were somewhat obscured by the mist! It wasn't long before it lifted and the views really were breath-taking. For those of us that weren't studying the inside of our eyelids we were afforded scenes of steep, terraced mountains, rugged cliffs and crystal clear water.

The pretty town of Amalfi was the destination for our lunch stop. Some chose to explore the Duomo di Amalfi while others headed straight for the pizzeria! The rain poured down but spirits weren't dampened as a wide range of souvenirs, varying in use and taste, were purchased for the folks back home!

Next stop Ravello and still the rain didn't let up. Our rather bedraggled group explored the pretty cliff top town, snatching glimpses of the amazing coastline through breaks in the cloud. Heading back to Sorrento was an adventure in itself. Winding roads and staggering drops left some people closing their eyes and looking the other way!

Time was then spent perusing the streets of Sorrento before heading back for the evening meal at the hotel. The sad news that our bus driver, fondly named Cheerio by the students was no longer driving us the next day was balanced out by the news that we had been able to change our ticket for Vesuvius to the next day. All we could do now was hope that the volcano is open!

On a positive note despite Ciro's, or Cheerio's, best efforts the emergency sick bags were surplus to requirements today - Meadowhead students 1, vomit still 10! 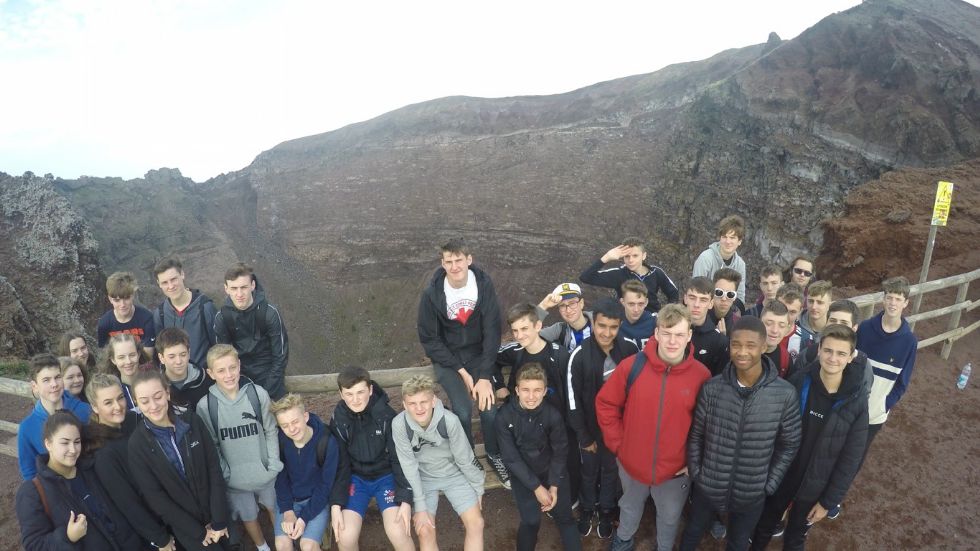 After passing the cleaner's exacting inspection it was finally time to say a fond farewell to the Hotel Villa Maria (some farewells were fonder than others). In the hands of our new bus driver, Ciro mark 2, we headed to Vesuvius.

The change in itinerary left us all excited. You could see the top of the volcano from the bay so we were all hopeful it would be open! At the entrance to the national park we were relieved to see the rangers waving people through - we would get to climb Vesuvius!

The walk up was steep and slow (Well except for Mr Chambers who walked up at the same speed he does if someone is going to beat him to the buffet - quite a pace). After a km of walking we met the guide who led us the remainder of the way to the top. Sharing his knowledge of all things volcanic, Vesuvius and Italian he pointed out the key features of the volcano. The steam vents acted as a constant reminder of the fact that Vesuvius is very much an active volcano.

The crater at 600m in diameter is impressive, it is incredible to see the size of it and the volcanic plug. The guide made the group a shout hello together to the other side. We waited.......after a few seconds the volcano spoke back, an impressive echo! The views were stunning and it was easy to see how close Pompeii was to the volcano and why it was directly in the line of fire of the 79AD eruption. After photo opportunities a plenty, along with some more souvenir purchases it was time for a leisurely stroll back down the mountain!

Ciro mark 2, otherwise known as Alberto, expertly drove us back down the mountain and due to the change to the itinerary we had to head straight to the airport. We arrived with a little more time than anticipated but luckily McDonalds was there to ease the wait.

In true Ryanair fashion we spent more time in queues at the airport than doing anything else. However we were finally allowed to board the plane, albeit a little late. It was a relatively smooth flight bar the last 10 minutes! It was a tense and turbulent descent and not the most pleasant of landings, with unexpected cross winds tossing the plane around, creating some dramatic swerves on the tarmac. All anxiety evaporated though as we slowed down and safely taxied to the gate! After a quick dash through passport control and baggage that was it, we boarded the last bus of the trip bound for Sheffield!

Staff and Students would like to tale one last opportunity to thank Mrs Cook for dedicating her time, effort and energy to organising this fantastic experience for the Meadowhead students. On behalf of all the students and staff of the trip we would like to say “Grazie”.